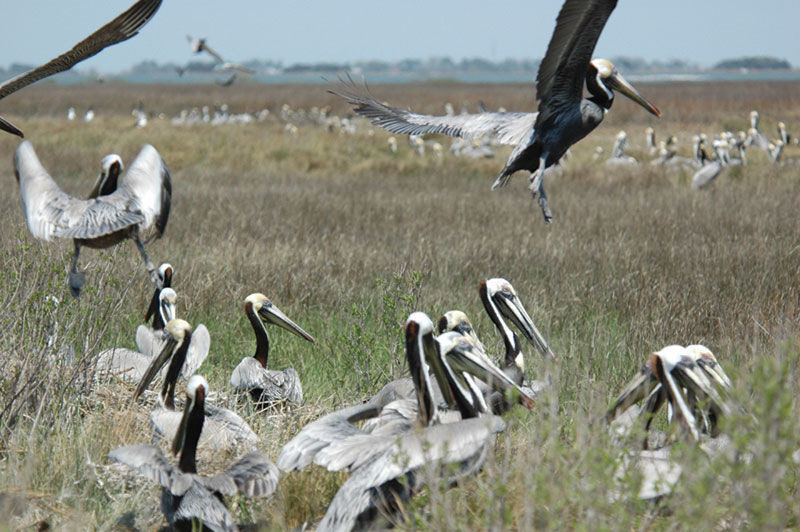 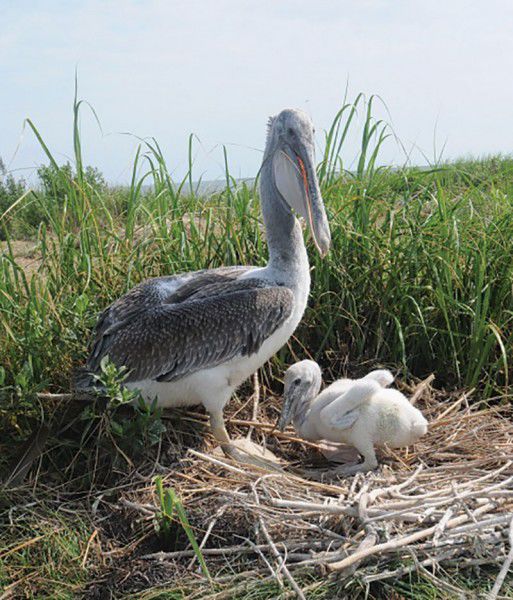 A pelican parent watches over its chick, which will take its first flight around the age of 75 days. (U.S. Fish and Wildlife Service)

A pelican parent watches over its chick, which will take its first flight around the age of 75 days. (U.S. Fish and Wildlife Service)

I was in North Carolina the first time I saw a brown pelican (Pelecanus occidentalis) and was immediately taken by this odd bird. Brown pelicans may look gawky on land, but when they take to the skies, they fly with elegance.

Browns are the smallest pelicans. They range in size from 42–54 inches long, weigh 8–10 pounds and have a wingspan of 6–7 feet. They are recognized by chestnut and white necks, white heads, pale yellow crowns, brown backs, grayish bills and pouches, and black legs and feet.

Brown pelicans can remain in flight for many hours at a time using slow powerful wing beats. While flying, they draw in their head between their shoulders, stretch out their broad webbed feet and fly in perfect silence. Also strong swimmers, young pelicans barely able to fly have been timed swimming at 3 miles per hour.

Pelicans are primarily fish eaters, and require up to 4 pounds of fish a day. They have extremely keen eyesight. Flying over water, sometimes as high as 70 feet, pelicans can spot a single fish. Once they see something tasty, they stop and dive, straight as an arrow, into the surf — sometimes submerging themselves completely. Pelicans usually come up with a mouthful of fish.

Suspended from the lower half of a pelican’s long, straight bill is a pouch that is used as a dip net. The pouch holds the pelican’s catch until the water — as much as 3 gallons — is squeezed out. The pouch also serves as a cooling mechanism, and as a feeding trough for young pelicans.

Pelicans are social and gregarious. Males and females, juveniles and adults, congregate in large flocks for much of the year. Brown pelicans nest in colonies mostly on small coastal islands, which provide protection from predators and flooding. Like many birds, newly hatched pelicans are blind, featherless and completely dependent on their parents. They soon develop a soft, silky down, followed by feathers. Average age at first flight is 75 days.

The young are fed with great care. Fish are instantly swallowed to be disgorged later for the young. At first, mashed fish is dropped into the young pelicans’ extended throats; later, an entire fish is fed to the young; and finally the parent birds merely place it on the edge of the nest.

Though more common in the Southeast, brown pelicans have been nesting in the lower part of the Chesapeake Bay since 1987. More recently, pelicans have moved northward into the mid-Bay portion, on islands near the Virginia-Maryland border.

Use of the pesticide DDT in the 1940s caused pelican populations to plummet. DDT, picked up by pelicans eating DDT-contaminated fish, caused the birds to lay eggs with shells so thin they broke during incubation.

Several efforts curbed the decline of brown pelicans. Passage of the Migratory Bird Treaty Act in 1918 gave protection to pelicans and other birds from feather collectors. Studies proving that pelicans were not harming commercial fisheries also helped to stop illegal hunting. In 1970, the brown pelican was listed as an endangered species affording them more protection. In 1972, the use of DDT was banned in the United States.

Although brown pelicans are doing well on the Atlantic Coast, threats still remain. Disturbance of nesting colonies, birds being caught on fish hooks or entangled in monofilament line, and oil or chemical spills still pose a threat to this wonderful bird.

All of these potential threats are situations that we can prevent by protecting known colonies during nesting, ensuring that hooks and used fishing line are properly disposed of and through laws that reduce the possibility of spills in Chesapeake Bay waters and shorelines.