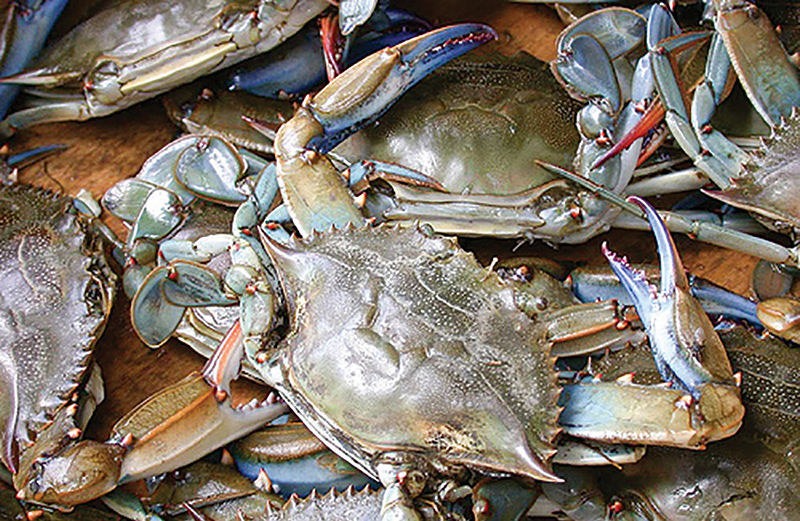 Rays, striped bass and bluefish, wading birds and mammals — especially humans — are among the many predators that feast on blue crabs. (Wikipedia) 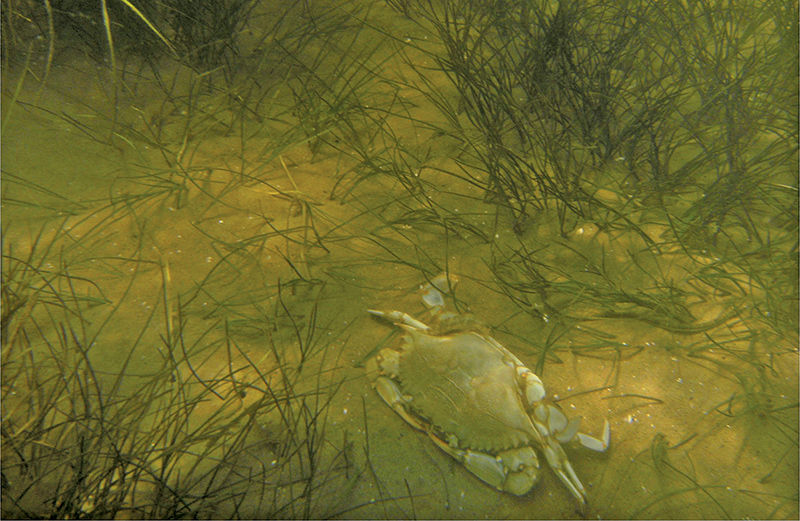 Rays, striped bass and bluefish, wading birds and mammals — especially humans — are among the many predators that feast on blue crabs. (Wikipedia)

When you hear the words Chesapeake Bay, one creature quickly comes to mind: the famous blue crab.

This succulent seafood is the pride and pleasure of the Bay. The scientific name for blue crab, Callinectes sapidus, illustrates its value as a favored delicacy. Callinectes means beautiful swimmer and sapidus means tasty or savory.

Displaying an almost arrogant attitude, the tenacious blue crab will take on any opponent, including humans. Watch a crab as it extends its claws up while scuttling sideways across a dock or kitchen floor, daring you to follow.

An intricate part of the Chesapeake Bay ecosystem, blue crabs eat just about anything, living or dead. No love lost here, crabs are also cannibals, devouring other adults and larvae of their own kind.

Important to the energy cycling in the Bay, blue crabs also serve as food for rays, striped bass and bluefish. Because they do not possess an internal skeleton, crabs grow by molting or shedding their shell. While in this molting phase (soft crabs), crabs may be consumed by wading birds and mammals. People, of course, consume huge quantities of both hard and soft crabs each year.

Blue crabs use a variety of aquatic habitats, from the salty waters near the mouth of the Bay to the fresher reaches of rivers and creeks. Depending on the time of year, blue crabs may be found burrowed into the Bay bottom or swimming freely in open water. Underwater grass beds are particularly important to crabs. Immediately after molting, crabs are particularly vulnerable to predators because of their soft shells, so they hide in grass beds for protection. Young crabs use grass beds for nursery areas, and crabs of all sizes forage for food there.

Mating occurs during the summer. Before mating, female blue crabs must shed their shell. The male crawls on top and cradles her between his legs until she molts. Cradling protects the female while her shell is still soft. After mating, the female’s shell hardens and the two separate. Males remain in fresher portions of the Bay and rivers and migrate into deeper waters to spend the winter. Female migrate to spawning areas near the mouth of the Bay.

Females that mature early in the summer will spawn before the end, burrow into the Bay bottom for the winter, and may spawn again the next spring. A late-maturing female will wait until spring to spawn. Eggs are fertilized in spring with sperm the female has stored over the winter. Females produce 750,000 to 8,000,000 eggs that they carry on their abdomens. At this stage the female is called a sponge crab for the sponge-like appearance of the egg mass. Eggs hatch from June through September.

The first life stage of a blue crab is the zoea, which is microscopic and free-floating. After several molts, the zoea reaches its second larval stage: the megalops.

Still invisible to the naked eye, the mega-lops looks like a cross between a crab and a lobster. Another molt and it takes on a tiny crab form. The tiny crabs quickly migrate from the southern part of the Chesapeake to tidal rivers and northern portions of the Bay. Another 12–18 months and the crab is mature, measuring about 5 inches point to point across the back.

Commercially, blue crabs from the Chesapeake Bay account for about one third of the nation’s harvest.

With the decline of other commercially important aquatic species, such as the oyster, the seafood industry in Chesapeake Bay is becoming more dependent on the blue crab. As the human population in the Bay watershed increases, so does the demand for crabs.

But this trend could be changing. According to the 2016 Chesapeake Bay Blue Crab Advisory Report, the start of the 2016 crabbing season saw an estimated 194 million adult female blue crabs in the Bay. This marks a 92 percent increase from last year’s number of adult females. Commercial harvest numbers are also expected to increase this year.

In addition to managing fishery pressure, we must also reduce pollutants that degrade water quality and blue crab habitat. Excessive amounts of phosphorus and nitrogen from sewage plants, farms and lawns promote massive algae blooms. These blooms block sunlight from reaching the Bay grass beds, reducing shelter and feeding areas for crabs. Also, when algae die they decompose, using up precious oxygen that the Bay’s grasses need to make food and other aquatic creatures, including crabs, need to survive. Crabs often die from low-oxygen levels when trapped in crab pots under these conditions.

If the blue crab and the heritage of the fishery are to survive for future generations, management will have to include more than determining seasonal harvest limits. We must also preserve crab habitat, by increasing the Bay’s grass beds and reducing nutrient pollution running off the land.

Here are things that you can do to help: