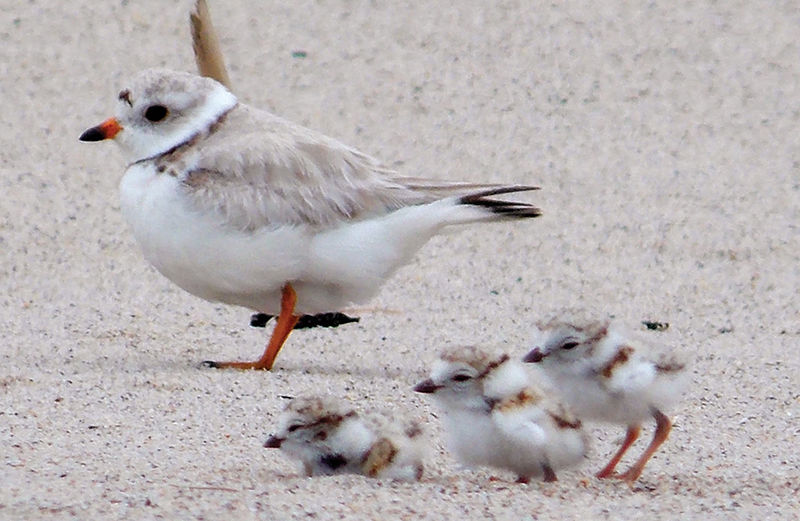 This piping plover and its chicks usually walk or run because they are well-camouflaged on the ground. Flying makes this species more conspicuous to predators. (Kaiti Titherington / U.S. Fish and Wildlife Service) 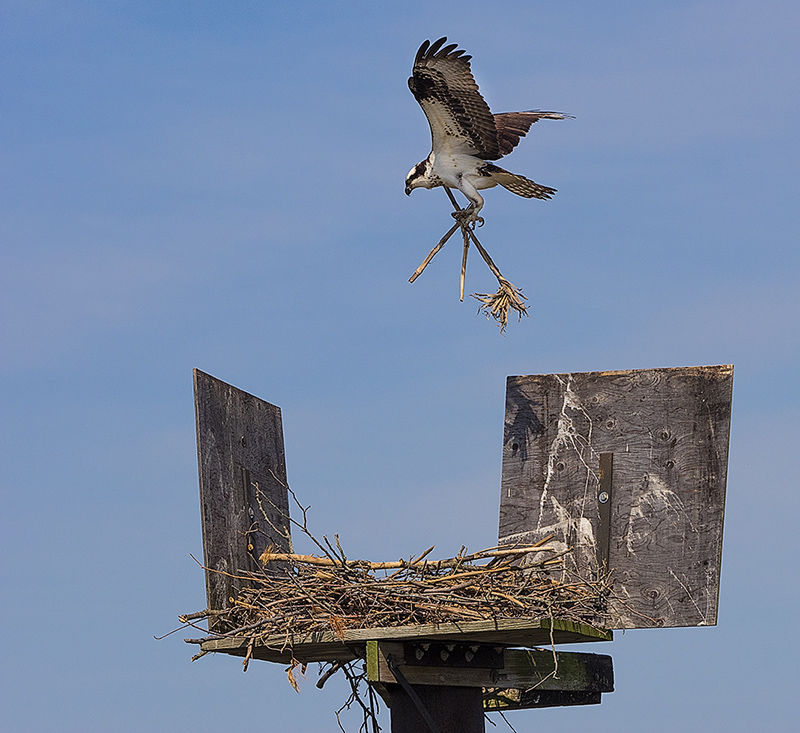 An osprey, right, brings building material to its nest site on a navigation marker in Breton Bay near Leonardtown, MD. (Dave Harp) 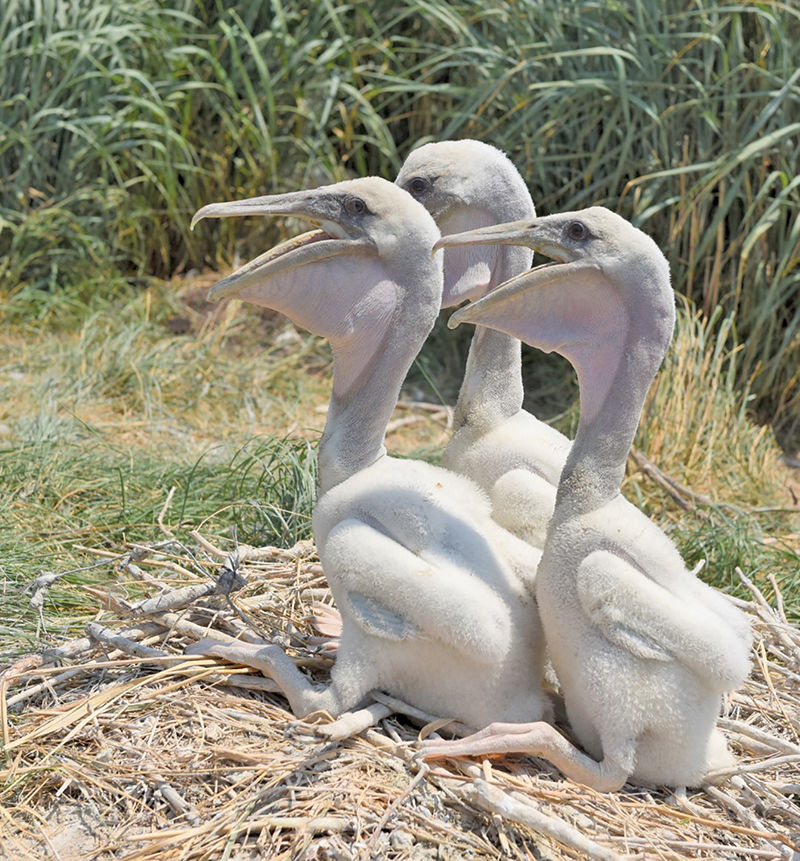 Brown pelican chicks clamor for dinner. Parents regurgitate predigested fish into the nest for them, switching to whole fish as the chicks get older. (Craig Koppie / U.S. Fish and Wildlife Service) 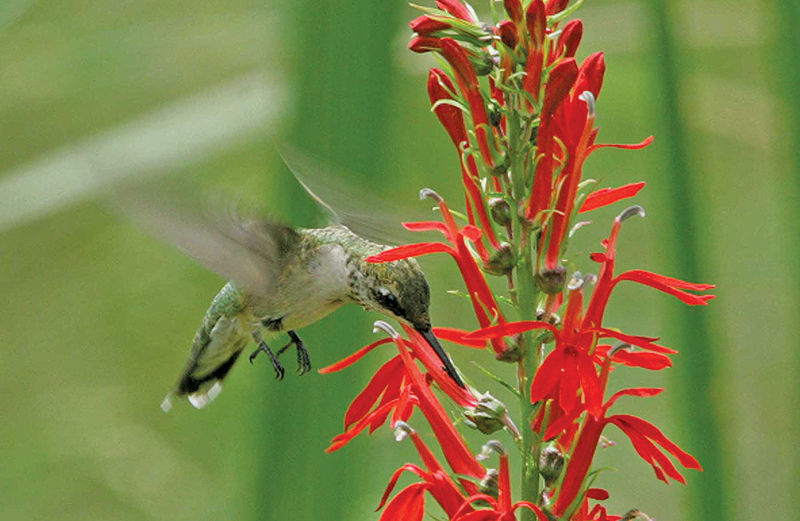 Ruby-throated hummingbirds are attracted to red or orange flowers because of their nectars’ high sugar content. (Bill Buchanan / U.S. Fish and Wildlife Service)

Except for perhaps insects, birds are usually the first wild animals we encounter in our lives. Before ever going to a zoo or aquarium, or on a fishing, hunting or wildlife watching adventure, we have probably been introduced to the class of animals known as Aves or birds, usually right outside our homes.

Birds are warm-blooded animals characterized by feathers, toothless beaked jaws, a high metabolic rate, a four-chambered heart, a strong yet lightweight skeleton and the laying of hard-shelled eggs.

Bird species are extremely diverse, live in many habitats worldwide and range in size from 2 inches (bee hummingbird) to 9 feet (ostrich). There are approximately 10,000 living species of birds; more than half are classified as perching birds.

It is the gift of flight that makes birds so accessible to us whether we live in cities, suburbs or rural areas. Birds’ wings evolved from forelimbs and gave birds the ability to fly, although further evolution has led to some species of flightless birds, like penguins.

The digestive and respiratory systems of birds are also uniquely adapted for flight. Seabirds and some waterbirds have further evolved and are able to swim.

For many Americans, birds are their first connection to nature. Many birds are migratory, flying between northern breeding grounds in the spring and summer, then returning south during fall to overwinter. This means that people have the opportunity to see a great variety of birds as they make these journeys every year.

Birds are not shy about letting you know they are nearby. In fact, they are quite social animals. They announce their presence with a repertoire of songs meant to attract mates, proclaim and defend territories, warn of threats, or communicate their location. Even birds not known for songs are vocal: think of the screech of a hawk, the hoot of an owl, the quack of a duck or the honk of a goose.

I personally value birds just for their beauty, song and sheer magnificence. But that may not be enough for others; especially for nature and wildlife. It seems that other benefits must also be assigned. So for those who may not intrinsically value birds, consider these merits: Birds are crucial to a healthy environment. They are sensitive to contaminants and can provide early warning signs of oncoming environmental issues. Birds also provide important ecological functions, including the pollination of plants; insect and other pest control; carrion disposal; and seed dispersal. All of these activities also support a healthy economy.

And if that’s not enough, birds play a huge role in the U.S. outdoor recreation industry. According to the 2016 National Survey of Fishing, Hunting and Wildlife-Associated Recreation, a survey conducted every five years, more than 101 million Americans — a staggering 40 percent of the U.S. population — participated in some form of wildlife-associated recreation, including fishing, hunting and wildlife-watching. Wildlife watching was most popular activity with 86 million participants, and of these, 45 million were bird watchers! In addition, 6.1 million Americans participated in hunting game birds and waterfowl.

A Demographic and Economic Analysis addendum to the 2011 National Survey showed that the 47 million bird watchers that year spent nearly $15 billion on trips and $26 billion on equipment. Local community economies benefitted from the $14.9 billion that birdwatchers spend on food, lodging and transportation, and 666,000 jobs were created as a result of bird-watching expenditures. The Economic Impact of Waterfowl Hunting in the United States, another addendum, reported that waterfowl hunters spent $663 million on trip expenditures and $699 million on equipment in 2011.

While these figures may be very impressive, I think David Attenborough summed it up best when he said, “Everyone likes birds. What wild creature is more accessible to our eyes and ears, as close to us and everyone in the world, as universal as a bird?”

To find out what you can do to help conserve birds 365 days of the year, visit migratorybirdday.org.