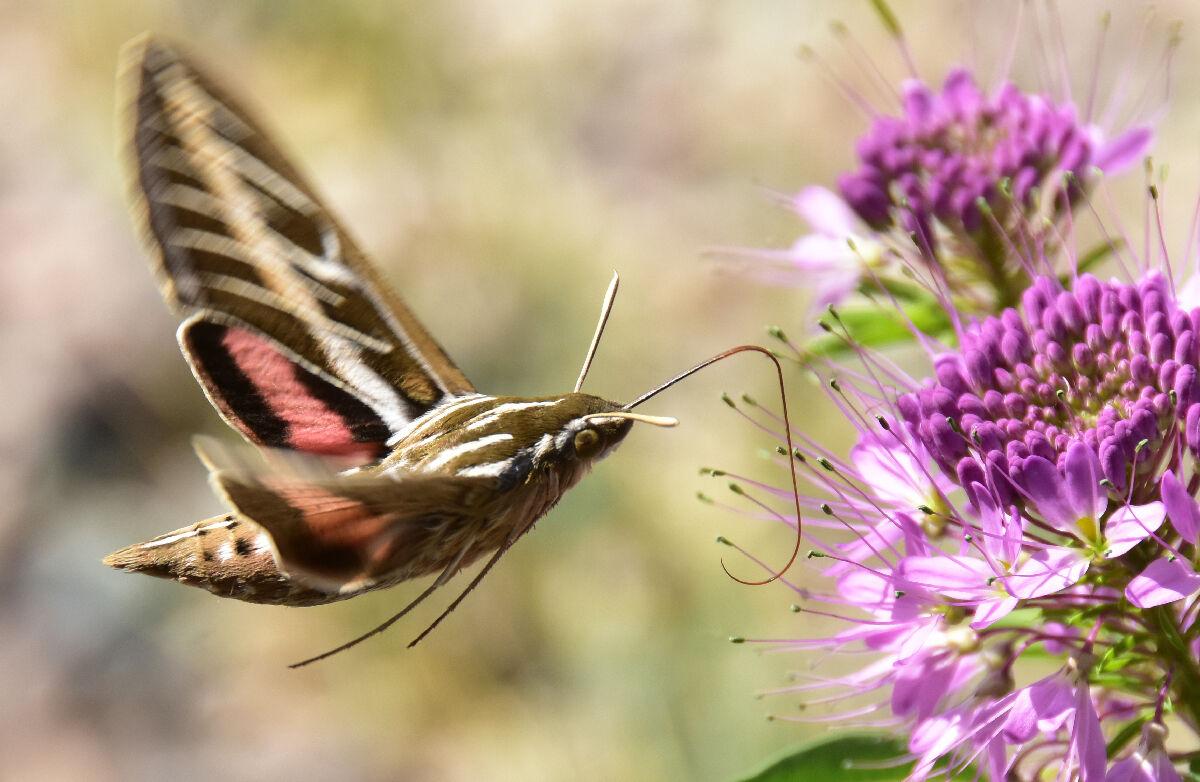 A white-lined sphinx hovers at a flower blossom to feed. It is one of a number of species in the Sphingidae family commonly called hummingbird moths because of their size and flight characteristics. (Tom Koerner/U.S. Fish & Wildlife Service) 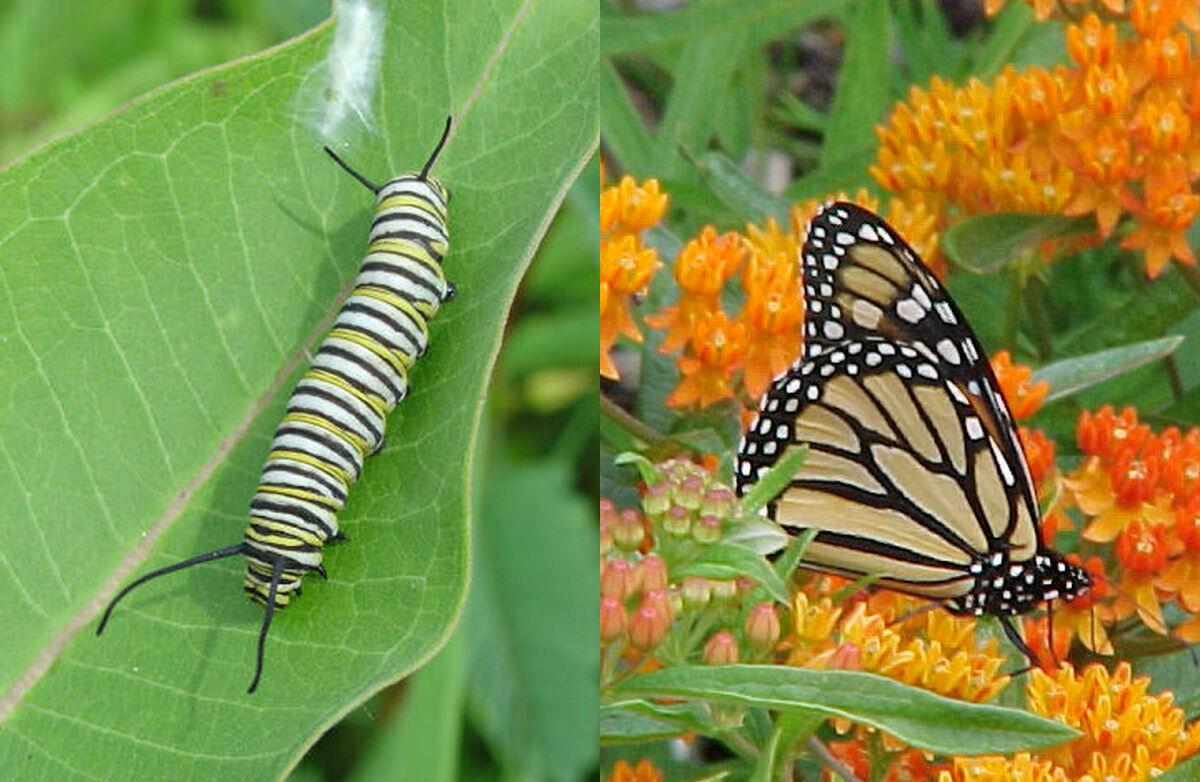 A monarch (Danaus plexippus) shown at both the caterpillar (larval) and butterfly (adult) stage, the latter being when it does its pollinating duty. (U.S. Fish & Wildlife Service) 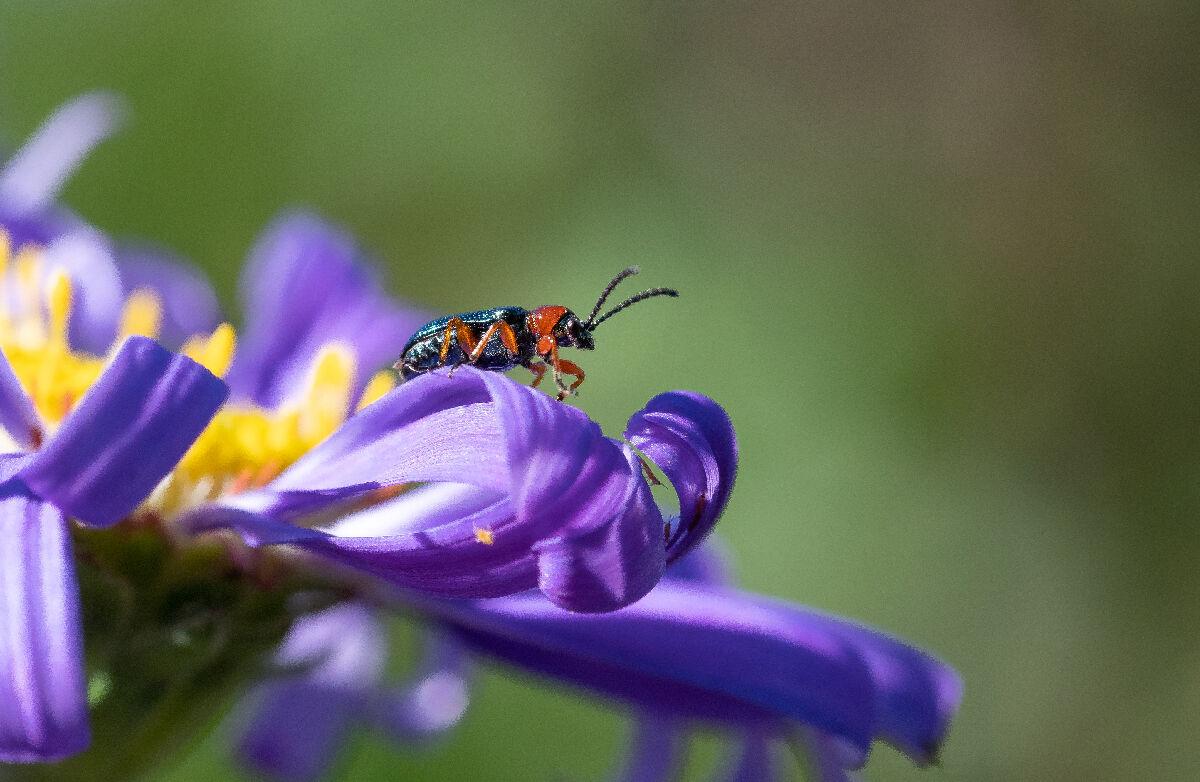 A brightly colored garden flower attracts a soldier beetle, the common name (along with leatherwing) of the Cantharidae family of beetles, which are prolific pollinators. (Sue Cro/CC BY-NC 2.0)

Pollination is the moving of pollen from the male part of a flower, the anther, to the female part, the stigma. This transfer is necessary for the production of seeds and fruits, and it helps to ensure the genetic variability that is vital to healthy plant populations.

Plants can be pollinated by wind or water, but they are most commonly pollinated by animals. Some 75% of all flowering plants need animal pollinators. Without them, these plants could not produce seeds and fruit and would eventually disappear, as would other animals that depend on the plants.

Many of the fruits and vegetables we eat depend on animal pollinators.

What makes a good pollinator? They should be highly mobile and able to move rapidly among flowers and clusters of flowers. They need to have structures on which pollen can attach. Pollinating animals often have specialized adaptations to gather nectar or pollen (the tongue of a hummingbird, the proboscis of a butterfly, the “pollen baskets” of a bee).

Who are pollinators? The club includes at least one mammal — the bat. While most bats feed exclusively on flying insects, some species feed on nectar. The lesser long-nosed bat, found in Mexico, Arizona and New Mexico, is particularly important in pollinating agave and cactus plants. It uses its long muzzle and tongue to reach the nectar and pollen.

Hummingbirds are the most common of the bird pollinators. They feed on flowers with a wide variety of shapes and colors — not just tubular and red — but they do prefer larger, showier flowers with lots of nectar. In the Eastern United States, the ruby-throated is the only hummingbird species. In Hawaii, honeycreepers are a critical bird for pollination.

Bees, of course, are the workhorses of the pollinating world. They possess excellent characteristics for this role. They’re highly mobile, covered with pollen-collecting hairs and adapted to feeding on nectar and/or pollen. Some even have “baskets” attached to their hind legs for carrying pollen.

Honeybees and bumble bees are social insects that often live in colonies — though many species do not, and they are just as important in pollinating trees and plants. Some examples of solitary bees include the small, greenish-blue, metallic-looking sweat bee; the mason bee, which uses clay to seal its nest; and the leaf cutter bee, so-named because it lines its nest (either in the ground or in small cavities in wood) with leaves that they cut.

Another group of familiar pollinators are butterflies and moths. A long mouth part known as a probiscus (essentially a straw) allows these insects to easily collect nectar from flowers. The monarch, eastern tiger swallowtail and zebra swallowtail butterflies are easily identified by their large size and bright coloration. Smaller, less recognizable butterflies and moths are just as important. Members of the Sphingidae family are sometimes called hummingbird moths because of the way they hover while collecting nectar with their long proboscis.

Less familiar pollinators include certain species of flies, wasps, hornets and beetles. Pollinator flies often resemble bees, but do not bite or sting. This resemblance is believed to protect them from predators. Wasps and hornets mostly feed their young other insects but will also regularly visit flowers to collect nectar.

Beetles are the most diverse group of insects, with millions of species worldwide. Some, such as soldier beetles (which are very common in mid– to late summer), are highly adapted to feed on flowers. Even mosquitoes feed on flowers occasionally to get nectar as an energy source.

How can you help pollinators?

There is increasing evidence that pollinators are in decline. This is due to habitat loss and fragmentation, which results in the loss of food and/or shelter. Pollinators can be impacted directly by insecticides and indirectly by herbicides that kill plants they need as food or habitat. Invasive plant species sometimes replace native plants that are food or habitat for pollinators or their larvae. Diseases, as well as parasites, are known to affect certain bees.

A well-planned pollinator garden will provide food for a variety of pollinating animals throughout the year. Native plants can be a food source for caterpillars, which, of course, become colorful butterflies and moths. Choose species that provide a steady source of nectar throughout the year. Install native nectar-producing plants in clumps.

To learn about native plants suited to where you live, visit pollinator.org. Under Resources, click on Planting Guides. You can then enter your zip code to find a regionally specific guide you can download.