You are the owner of this article.
Edit Article Add New Article
You have permission to edit this article.
Edit
Welcome, Guest
News
Travel
Columns
Opinion
Multimedia
Calendar
About
Contact Us
e-Edition
Subscribe
Donate
1 of 2 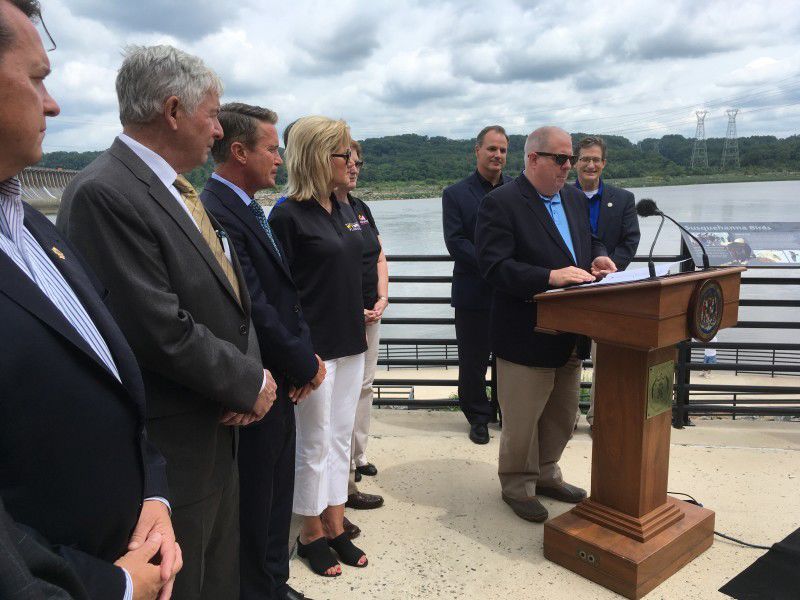 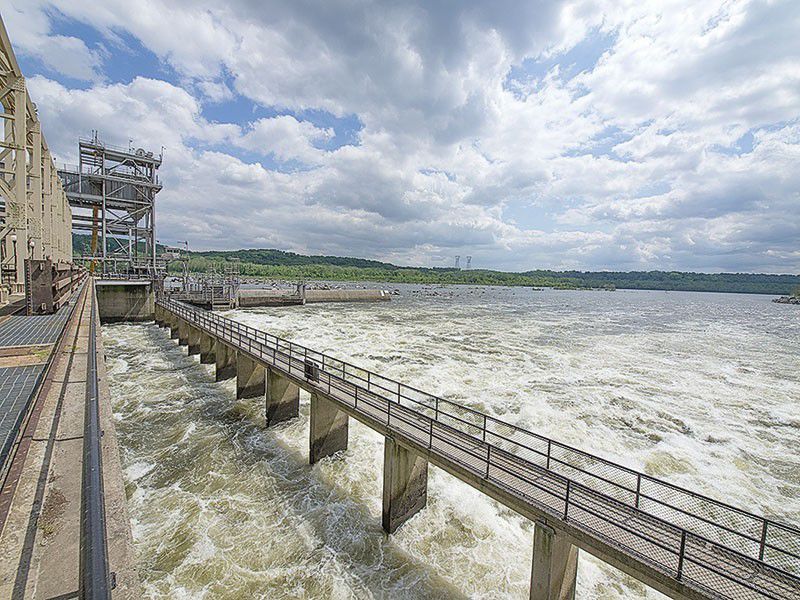 Hydroelectric dam built in 1928 once helped Chesapeake Bay by trapping sediment and nutrients flowing down the Susquehanna River. But the reservoir behind the dam is full, and no longer prevents downstream pollution.

Hydroelectric dam built in 1928 once helped Chesapeake Bay by trapping sediment and nutrients flowing down the Susquehanna River. But the reservoir behind the dam is full, and no longer prevents downstream pollution.

Declaring the sediment buildup behind Conowingo Dam a growing threat to the Chesapeake Bay, Maryland Gov. Larry Hogan announced Tuesday a pilot project to dredge up a tiny portion of the accumulated silt and sand.

Speaking at a press conference at the dam, Hogan said the state later this month would issue a request for proposals to dredge 25,000 cubic yards of sediment by next spring from the reservoir upstream of the hydroelectric facility on the Susquehanna River.

The intent, he said, is to pin down what it would cost to dredge massive quantities of sediment from the Conowingo “pond,” as the reservoir is called, and to find out if there are viable markets for reusing the material. He said that he hoped the project would help the state determine whether large-scale dredging is feasible - even though an earlier study concluded that dredging the built-up sediment would be costly and provide little overall benefit to the Bay.

Since its completion in 1928, the 94-foot high dam has been trapping millions of pounds of sediment, as well as the nutrients attached to the particles, keeping them from flowing into the Bay 10 miles downstream. But the pond has been slowly filling, and a study led by the Baltimore District of the U.S. Army Corps of Engineers found that it has reached capacity and now does little to prevent material from reaching the Chesapeake.

Another concern is that major storms, and even heavy spring rains, can scour large quantities of the deposited sediment from the river bottom and flush it into the upper Bay.

“Much of our efforts to protect the Bay and safeguard our environment for future generations could be wiped out by the effects of one bad storm,” Hogan said. “Simply put, this is a growing threat which must be addressed.”

Hogan’s announcement came on the heels of a brief, invitation-only, closed-door “summit” about the dam at a nearby volunteer firehouse. The meeting, the second that Hogan has held on Conowingo, was welcomed by rural elected officials who’d been invited and have long complained that the dam is a bigger pollution threat to the Bay than almost anything coming from their portions of the watershed, including farming, septic-based development or stormwater runoff.

Charles D. “Chip” MacLeod, a lawyer for the Clean Chesapeake Coalition, a group of seven rural counties, most of them on the Eastern Shore, called the summit “total vindication” of its position that the sediment buildup behind the dam should be made a priority of the Bay cleanup.

“We’ve lost sight of the real problem,” said Richard Rothschild, a commissioner from Carroll County, one of the coalition members.

Others are not so sure. Alison Prost, Maryland director of the Chesapeake Bay Foundation, who was not invited to the summit, issued a statement saying that “while dredging could be a part of the solution” for cleaning up the Bay, the Corps study indicated that the most cost-effective way to reduce pollution coming across the dam would be to carry out more runoff control practices upriver.

Hogan, though, has aligned himself with the Clean Chesapeake Coalition’s position on the dam since he campaigned for governor in 2014, claiming that state and federal officials and environmentalists were ignoring Conowingo’s threat. He recently became chairman of the Executive Council that oversees the federal-state Bay Program restoration effort, which gives him greater clout to press his case.

The Republican governor said he was gratified that scientists have come around to agree with his position on the importance of dealing with the sediment behind the dam.

The Corps of Engineers study found that between 2008 and 2011, only 13 percent of the sediment coming into the Bay from the Susquehanna was scoured from what had been deposited in the reservoir behind the dam. Even during Tropical Storm Lee in 2011, a major flood, only about 20 percent of the sediment that flooded into the Bay originated from sediment stored behind Conowingo, while the rest was flushed downriver past the dam without ever being deposited.

But the lost trapping capacity of the dam does mean that more nutrients from up the Susquehanna are washed downriver to the Bay, where they contribute to algae blooms and fish-stressing low-oxygen conditions in the water. To compensate, the Corps study estimated that areas upstream of the dam would need to keep an additional 2.4 million pounds of nitrogen and an extra 270,000 pounds of phosphorus annually from getting into the river. That would require a 9 percent greater reduction in nitrogen and a 38 percent greater cut in phosphorus from now to 2025.

Dredging the sediment and nutrient buildup from behind Conowingo would in theory allow the dam to trap more sediment, as has happened in the past. But the Corps study found that this would be costly and of limited benefit to the Bay. To restore sediment levels to what they were in the mid-1990s, the study estimated, 25 million cubic yards of silt would need to be excavated. The Corps estimated that could cost up to $3 billion. And unless the flow of sediment coming down the river is curtailed, the pond would gradually fill in again. Roughly 3 million cubic yards a year, or 1.5 million pickup truckloads, would need to be dredged annually to avoid losing ground. The Corps study estimated that could cost anywhere from $48 million to $267 million each year.

Clean Chesapeake representatives maintain that the Corps study was flawed. And in any case, they suggest some short-term actions are needed now, because Pennsylvania is lagging so badly in reducing its pollution to the Susquehanna.

But a recently completed study by researchers with the University of Maryland Center for Environmental Science finds that phosphorus flushed past the dam along with sediment scoured from the reservoir “would not have a large effect on the Chesapeake Bay.”

The state last year issued a “request for information” seeking preliminary proposals for dealing with the sediment behind the dam. It received 13 responses suggesting dredging and other options for using it to treat soil or create building materials. Roy McGrath, director of the Maryland Environmental Service, said the request for proposals would be more detailed.

The federal-state Bay Program is re-evaluating the progress made to date in restoring the Chesapeake’s water quality, and is finalizing new computer modeling to project what more needs to be done. Meetings are planned this fall, and states are expected to begin drawing up revised cleanup plans next year. Ben Grumbles, Maryland’s environment secretary, said state officials hope the information gleaned from the demonstration project will help shape those plans.

“We’re going to keep our fingers crossed,” said Bob Meffley, a Cecil County councilman who was among the summit invitees. He said he lives on the Bohemia River which, like much of the Bay, is showing signs of recovery, with underwater grasses seemingly everywhere and crabs plentiful — “except when we get a rain,” he added, “we don’t see anything” because of the sediment stirred up in the water.

Others in attendance at the summit saw the dredging demonstration as a minor step, but one still worth taking.

“What it represents is a sliver of the problem,” said Ann Swanson, executive director of the Chesapeake Bay Commission. “It’s important,” she added, “because they want to see if they can engage the private sector in (finding) innovative uses (for the sediment), but what’s equally important is to recognize that 80 percent of the (pollution) load coming down the Susquehanna is from the upstream watershed and 20 percent is from scour.”

“We don’t care where reductions come from,” he said, adding that if the test indicates it’s feasible, it could be factored into future cleanup plans. But Rodrigues added that whether dredging is done or not, upstream pollution reductions will still be needed.

Joel Dunn, president and CEO of the Chesapeake Conservancy, a conservation group, who was also invited, praised Hogan’s move. But he said it should not take away from working to reduce pollution from upriver, while enlisting private as well as public involvement.

“The sediment behind the dam is a major issue and should be addressed in the most creative way possible,” Dunn said, “but perhaps more important is a focus on reducing future pollution from coming down the river, otherwise our children will be dealing with this same issue.”

In his press conference remarks, Hogan seemed to acknowledge that. He said that dealing with the sediment and nutrients behind the dam is “just one of many approaches we must take.” But he added that he considered it “an extremely important one.”

The demonstration project will be funded by Maryland, but Hogan made it clear that if it led to more dredging, he expected financial help and cooperation from Exelon Corp. the dam’s owner, the federal government and the states upriver. Maryland has held up renewal of Exelon’s federal license to operate the Conowingo hydroelectric facility, citing concerns about the impacts on state water quality of the sediment buildup.

“This is not just Maryland’s problem,” Hogan said. And in response to a reporter’s question, he said, “If it comes to that, we’ll file suit against the EPA and the upstream states.”