You have permission to edit this article.
Edit
Welcome, Guest
News
Travel
Columns
Opinion
Multimedia
Calendar
About
Contact Us
e-Edition
Subscribe
Donate
1 of 3 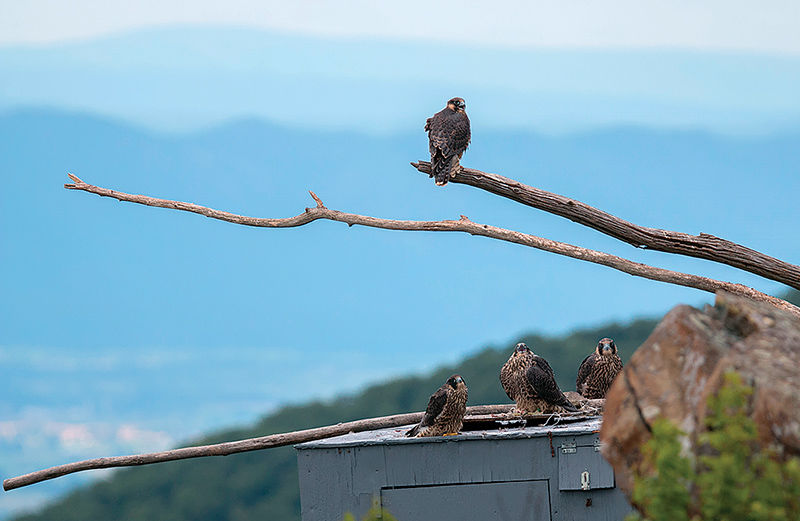 Young peregrines, lingering near a hacking box, prepare to leave the site. Their odds of surviving their first flight is much greater than bridge-nesting peregrines, who suffer a 90 percent fatality rate as the uncertain young sail from their nests and fail to gain enough lift to reach the shore. ( © October Greenfield) 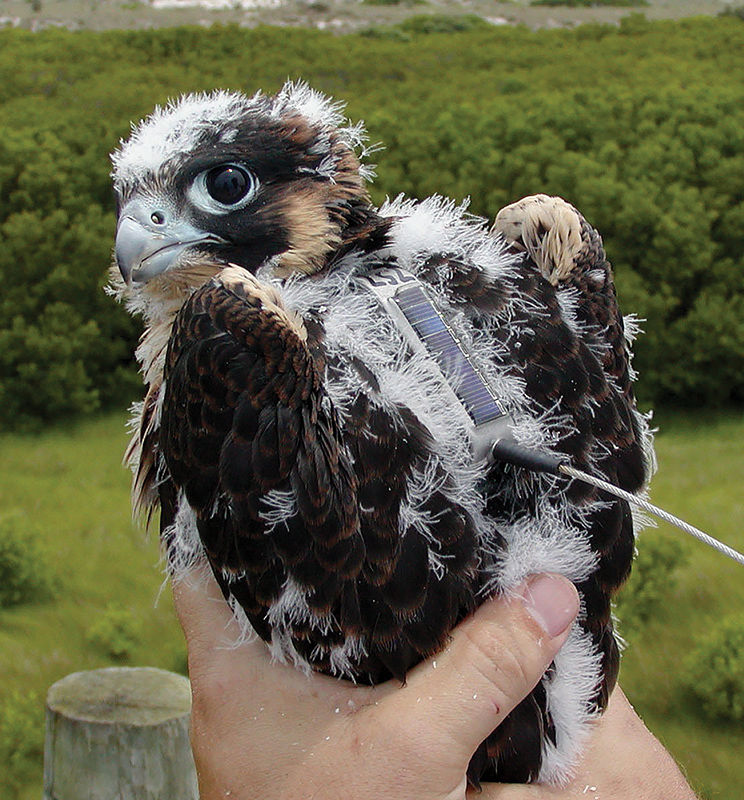 An eyas, or young peregrine, is fitted with a satellite transmitter that will track where it goes once it has left the hacking site. (© Bryan Watts) 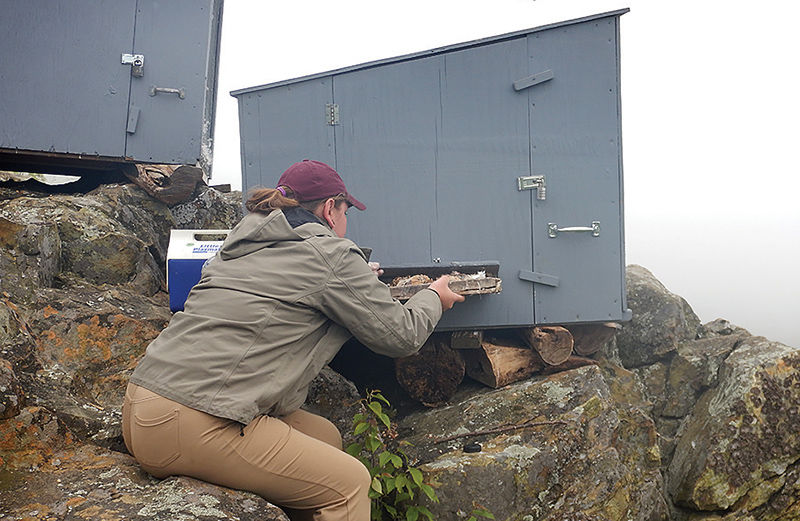 Slots in the boxes allow for the delivery of food — usually farm-raised quail, shipped frozen — and the cleaning of the box floor. Trash grabbers are used for this interaction to keep personnel out of the young birds’ sight lines and prevent acclimatization to humans. (National Park Service)

Young peregrines, lingering near a hacking box, prepare to leave the site. Their odds of surviving their first flight is much greater than bridge-nesting peregrines, who suffer a 90 percent fatality rate as the uncertain young sail from their nests and fail to gain enough lift to reach the shore. ( © October Greenfield)

An eyas, or young peregrine, is fitted with a satellite transmitter that will track where it goes once it has left the hacking site. (© Bryan Watts)

Slots in the boxes allow for the delivery of food — usually farm-raised quail, shipped frozen — and the cleaning of the box floor. Trash grabbers are used for this interaction to keep personnel out of the young birds’ sight lines and prevent acclimatization to humans. (National Park Service)

Able to dive after avian prey at a shrieking 200 miles per hour, the peregrine falcon is the fastest animal on Earth. Yet the return of the peregrine to its historic habitat in the western Chesapeake region has been anything but speedy.

After their numbers were decimated in the mid-20th century by DDT pesticide poisoning, peregrines have made a strong comeback in Eastern urban areas but rarely grace the mountains and valleys of central Appalachia that were once a stronghold for the species.

According to Bryan Watts, director of the Center for Conservation Biology, Virginia supported 31 pairs of peregrines during 2016’s breeding season, the largest recorded in the state, even before the decimation from DDT, which weakened eggshells to the point where the chick inside failed to develop, as well as built up in the adults’ bodies, killing them. But only two of these pairs were found in the Appalachians — less than 10 percent of the statewide total and a far cry from the U.S. Fish & Wildlife Service goal of restoring 21 breeding pairs to the central and southern Appalachians, including a portion of the Bay watershed.

The “dramatic success story” of peregrine reintroduction to Virginia, Watts said, “is dampened only by the lack of recovery in the mountains.”

“It’s our duty” to restore the Eastern population to its former domain, said Rolf Gubler, a park service biologist who leads a peregrine reintroduction program at Shenandoah National Park. “DDT erased the board.”

Prior to the scourge of DDT, the Blue Ridge and Allegheny Mountains of Virginia and Maryland were focal points for Eastern peregrines, which prefer to nest on steep slopes of bare rock to deter predators. Today, these sharp-tailed raptors are found mostly in urban environments like Richmond or Baltimore, where high, isolated nesting sites such as bridges and office buildings, coupled with abundant year-round prey like pigeons and starlings, make for ideal, if unexpected, habitats.

The Center for Conservation Biology, National Park Service and state agencies have partnered in an effort at Shenandoah National Park to encourage a return to the mountains.

The process involves the capture, transport and eventual release of young peregrines not yet ready for flight, called “eyases.” Biologists call the artificial nesting process “hacking.”

The eyases are taken from nesting sites in locations where their first flight is likely to be their last — beneath water-spanning highway and railway bridges, which, while appealingly inaccessible to predators, pose a deadly risk for juveniles taking their initial leap into the air.

Gubler said that bridge-nesting peregrines suffer a 90 percent fatality rate as the uncertain young sail from their nests and fail to gain enough lift to reach the shore.

To counter this waste of life, and to further the westward expansion of the peregrine’s historic range, Gubler and his colleagues at the center, with the help of personnel from the Virginia departments of Game and Inland Fisheries and Transportation, use cranes and rappelling gear to capture the peregrines from nests beneath bridges spanning the James and Tappahannock rivers and the Chesapeake Bay.

A brood of two to five young, ranging from 15 to 27 days old, are removed from the nest, banded and taken to Shenandoah National Park. There, biologists place them in wooden boxes at an ideal nesting site among stone crevices and boulders on bare cliff tops that are barred to the public.

The boxes are staid affairs, simple enclosures painted to match the stone they’re set on, with a wire mesh “window” on one side. Hacking sites are spaced four to five miles apart to allow for territorial boundaries. In 2017, biologists placed two hacking boxes at Franklin Cliffs and released three groups of fledglings.

The peregrines are fed and monitored for two weeks or until they’re old enough to fly.

Slots in the boxes allow for the delivery of food — usually farm-raised quail, shipped frozen — and the cleaning of the box floor. Trash grabbers are used for this interaction to keep personnel out of the young birds’ sight lines and prevent acclimatization to humans.

When the birds are a month-and-a-half-old, food is placed next to the box and one side is opened. The young birds, tagged for tracking purposes, find perches to exercise their wings. In a couple of hours, they’re ready to leap into the sky. A day or two after their first flight, Gubler said, the peregrines display markedly advanced flying capabilities and zero in on prey.

The Shenandoah hacking program has released 260 birds since the beginning of the program in 2000, at a rate of 10 to 20 birds per year.

When conditions are ideal, adult peregrines return to the general location of their juvenile nests to raise their own brood. But the birds introduced at Shenandoah have either not returned or escaped observation.

Although the eyases are tagged, they are usually not found or reported. A small number have been fitted with satellite transmitters, at a cost of approximately $4,000 each, and have been tracked into 26 Eastern states, from northern sites in New York and Michigan to the southern reaches of Louisiana.

“The appropriate question is not why don’t they stay in the park, but why they don’t return when they are 3 years old to establish breeding sites,” Watts said. “The answer is that we don’t know.”

The hacking boxes at Shenandoah National Park are placed in what seem like excellent locations, but Watts said he believes there may not be enough ideal habitat in the surrounding area to lure the birds back. The regrowth of vegetation around cliffs has reduced the amount of bare stone that the birds need for nesting, and hikers and campers are a frequent disturbance along the most prominent rock formations.

Watts said that “virtually all states” down the mountain range to Georgia now have at least one breeding pair but “we do not feel that the recovery in the mountains is complete, and most historic nest sites remain empty.”

As a result, biologists are changing their strategy. They have learned that hacked peregrines are most likely to remain in areas where they see others of their kind nearby — but not too close. They now concentrate the hacking boxes, still at intervals of about 4 or 5 miles, in an area that has at least one naturally breeding pair.

In the past, Watts’ team has placed hacking boxes at Shenandoah on the Hawksbill, Hogback and Blackrock overlooks. Today they use only Franklin Cliffs, but may expand hacking activities into Virginia’s mountainous southwest.

Watts and Gubler believe that their revised approach to hacking, combined with the preservation of vertiginous mountain habitats, may still — in time — achieve an Appalachian recovery.

The peregrine falcon (Falco peregrinus), resplendent in a black-and-white barred underside, with an ebony mask and pointed wings, is one of Earth’s most widespread bird species, native to every continent except Antarctica.

From the 1950s to the 1970s, peregrines were among the raptor species, including the bald eagle, that fell victim to the eggshell-weakening effects of DDT. After the United States outlawed DDT in 1972, the peregrine began its slow return to native ecosystems.

Peregrines are excellent, high-speed hunters that can take down birds more than twice their weight and fly up to 15,500 miles during yearly migration. While ferocious in the air, peregrines are actually very delicate animals, with a body finely honed to live on the extremes of performance but unable to absorb much physical injury.

Caution and territorial needs historically led peregrines to nest on cliffs with sheer drops, naked of shrubs and grasses that could conceal predators. Ideally the nests face west so that young falcons can take advantage of prevailing winds for their first flight. Today, peregrines in the Chesapeake region seem to prefer the height of bridges and urban buildings to their native mountainsides.