Skip to main content
You are the owner of this article.
Edit Article Add New Article
You have permission to edit this article.
Edit
Welcome, Guest
News
Travel
Columns
Opinion
Multimedia
Calendar
About
Contact Us
e-Edition
Subscribe
Donate
1 of 2 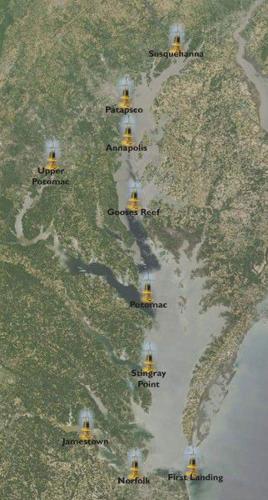 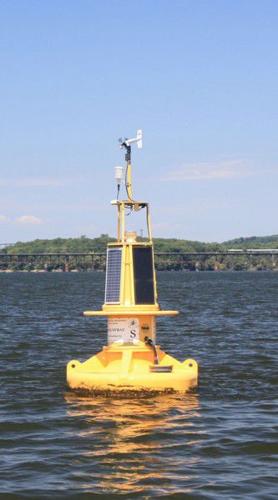 After paying the launch fee at a marina in Havre de Grace, MD, Doug Wilson walked back to the Zodiac inflatable boat shaking his head.

The marina manager, who routinely checked local air, water and other climate conditions on the Internet, was oblivious to the fact the information was coming from a yellow buoy floating in the distance. "It was the first he had heard about it," said Wilson, an oceanographer with the National Oceanic and Atmospheric Administration's Chesapeake Bay Office, "even though you can see it from the office."

The buoy, floating near the mouth of the Susquehanna River, is one of 10 solar-powered "smart buoys" in the Chesapeake Bay Interpretive Buoy System, which collects a continuous stream of local water quality and weather data.

Each buoy makes that information available to boaters, scientists, students and other people who want to know local conditions almost as soon as it's recorded.

During Hurricane Irene in August 2011, for instance, people could see that two buoys, one near First Landing in Virginia and one near Gooses Reef at the mouth of the Choptank in Maryland, were bobbing in 14-foot waves.

Such a continuous stream of information also helps fill in gaps left by other monitoring programs. For example, much of the water quality monitoring in the Bay takes place at specific locations during twice-a-month cruises in the summer, and monthly the rest of the year. The amount of nutrients entering the Bay from its rivers is estimated from water samples collected every few weeks.

The buoys' continuous monitoring can provide a fuller picture. For instance, episodes of low-dissolved oxygen that could be lethal to some species might occur between regular monitoring cruises and go unseen.

On this day, Wilson was on his way to inspect a new nitrate sensor placed on the Susquehanna buoy in April. While the amount of nitrogen coming down the Bay's largest tributary is monitored at least once a month at the Conowingo Dam 10 miles upstream, the device attached to the buoy can take a measurement every hour.

"My dream here ever since this went in was to watch nitrate flow by," Wilson said. Nearly two-fifths of the nitrogen that flows into the Bay each year comes down the Susquehanna — more than any other river.

Because the nitrate instrument is new, the verdict is not yet in about its ability to estimate nitrogen over time. But the data so far is encouraging. Its estimates closely match samples collected at Conowingo.

If successful, the sensor could supplement information collected upstream. For instance, samples cannot be collected at the dam during extreme high water events such as those that occurred during Tropical Storm Lee in September 2011 because it is too dangerous. But scientists say those peak flows can be disproportionately important for moving pollutants downstream.

"If we have a Lee or Irene event, we will be able to see those spikes in real time," Wilson said.

The buoy can't provide the full, year-round picture though, as it has to be pulled from the river when ice begins to form during the winter.

"We don't have enough information to use this as a regulatory tool, but we can use this as a public education tool," Wilson said.

The buoy system was launched in 2007 to collect data and to help mark the National Park Service's new Capt. John Smith Chesapeake National Historic Trail. Each buoy not only collects a suite of information about temperature, humidity, wind, waves, water quality and other conditions, it also provides people with local anecdotes about John Smith's Chesapeake Bay explorations in 1607–08.

The system has since grown to 10 buoys, with two spares that can be placed in the event one is damaged — buoys have been hit by boats, debris during storms and one, located in the Patapsco River, was shot.

While all of the buoys monitor a common suite of parameters, the base of each buoy has openings through which scientists can mount additional devices so they can, in effect, get custom information important for a particular site, such as the nitrogen levels in the Susquehanna.

In the James River, NOAA scientists are testing a device that can identify individual tagged fish. Wilson envisions a system in which scientists and interested citizens could go online and find out exactly which striped bass, shad or sturgeon is swimming by based on its tag.

"Once you have a platform that is sitting in the water transmitting regularly, there are a host of things you can have on it," Wilson said.

People can get the information on the Internet, by using smart phone apps, or by calling a toll-free number.

More than 10,000 people a month check in for data — more during high use summer periods. That number can swell during extreme events: More than 6,400 checked in on a single day during Hurricane Irene. More than 20,000 people have downloaded smartphone apps to access buoy data.

The information available through the buoys has gradually increased. This year, by using other temperature and water data already collected, the buoys began providing estimates of the local heat index and the likelihood of encountering jellyfish at each location.

Nonetheless, many people either don't know about the buoys or — like the marina manager — don't know where the information they get originates.

"Word is getting out to folks," said Kim Couranz, a spokeswoman for NOAA's Bay Office. "We want people to know they are there and to use them."

But the future of the system is uncertain. Money to maintain the buoy system was not included in the proposed 2013 NOAA budget. The system remains funded under a six-month spending extension approved by Congress in September.

It costs about $800,000 a year to operate the buoy system, including placing and removing them each year, and monthly inspections to check and clean the equipment.

When the nitrogen sensor was pulled from the Susquehanna, much of it was encased in a mass of what looked like amphibian eggs.

Several buoys in the Bay also have to come out of the water during part of the winter to protect them from ice. Even though they are anchored to three, 700-pound railroad wheels, flowing ice can drag buoys for miles.

The Chesapeake Conservancy, a nonprofit organization that helped to fight for the creation of the system to help mark the John Smith trail, generated more than 600 letters to members of Congress urging support for the buoy system, said Joel Dunn, the group's executive director. Sen. Barbara Mikulski, D-MD, and Rep. Jim Moran. D-VA, both of whom are members of the Appropriations Committees that determine funding in their respective chambers, have sought to restore funding, Dunn said.

The buoys provide information that builds interest in exploring and protecting the Bay, whether people are actively on the water seeking information about local conditions to help safely guide their trips or experiencing the Bay vicariously over the Internet or apps, he said.

"I check the Annapolis buoy all the time, and I'm not even a sailor," Dunn said. "It gives me a sense of what is going on out on the Bay."

Real-time data from the Chesapeake Bay Interpretive Buoy System may be accessed at buoybay.noaa.gov. Smartphone apps may also be dowloaded at the iTunes Store or the Android Marketplace. Information may also be accessed by calling, toll-free, 1-877-BUOY-BAY.